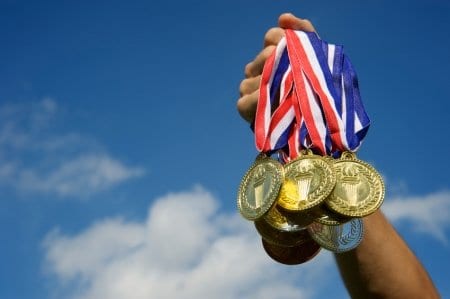 While most of Romania was hit by a spell of cold weather and many mountain areas and its northern regions had been placed under a Code Yellow for snow and wind during the last week of November, a Romanian team of young bright minds was in the much warmer neighboring Bulgaria competing in two international informatics competitions, between November 22 and 24.

But a week later, this Romanian team received a most warm welcome when it arrived home as it had managed to get nine medals in both these recent regional informatics competitions. It was also Romanian students who were awarded the gold and three silver medals at the Balkan Olympiad for Informatics for Juniors.

Costin Andrei Oncescu, a sixth grade student from CÃ¢mpulung Muscel, in Arges county, returned home with the gold from this Olympiad, after being the champion with another gold medal last year as well. Smaranda-Monica Dicu, Darius Marian and Andrei-Cristian Stanciu, all three in the eight grade from Bucharest, got the other three silver medals.

This team was part of the International Informatics Tour, which took place at the same time in Bulgaria, and brought in another five medals for Romania: one gold, three silver, and one bronze. An eighth grader from Constanta, George Chichirim, was awarded the gold, while the silver medals went to Vlad Rochian, who is in the eighth grade, from Timisoara; Andrei Popa, eighth grade, from Vaslui, and Mihai Gheorghe, 11th grade from Bucharest. The bronze medal went to Daniel Constantin, another 11th grader from Bucharest.

If you think this is not amazing enough, earlier this year a 19-year Romanian student, Ionut Budisteanu from Ramnicu Valcea, won the Intel prize for computer science innovation with his self-driving car project. This was no mean feat, as this student, singlehandedly defeated some serious engineers and experienced teams of well-established companies, snatching the prestigious Intel ISEF award for computer science research and collected no less than USD 75,000 in prize money under the Gordon E. Moore prize at the Intel International Science and Engineering Fair in Phoenix, USA.

The young Romanian’s project uses artificial intelligence for a self-driving car that reads the car’s position and irregularities on the road. The high number of deaths from road traffic accidents, some 2.5 million per year, inspired Budisteanu to create the automatic driving system, and back then this had attracted Education Minister Remus Pricopie to formally congratulate BudiÅŸteanu on his Facebook page, saying “I congratulate you for your work and for this award, which is a great and well deserved achievement. I also thank Ionut and the Romanians whose achievements all over the world promote Romania”. An Intel spokesperson pointed out that IonuÅ£ Budisteanu’s invention is also cheap to make, at no more than USD 4,000, which makes it more viable for production.

This year, approximately 1,600 young scientists were chosen to compete in the Intel International Science and Engineering Fair. They were selected from 433 affiliate fairs in more than 70 countries, and no surprise that over two hundred were from Romania, and equally not surprising is the fact that during the international informatics competition earlier this month in Bulgaria informatics headhunters lined up in the aisles for talented students.

The Romanian government has been hard at work to make every aspect of the country’s educational system digitized and to include technology or innovation one way or another, and it seems to be paying off, as the entirety of the nation’s 10th graders will be computer literate by 2016. By “computer literate” one is not to be a mere excellent user of the internet, nor simply a proficient user of mainstream software programmes, but in fact an expert at programming in numerous languages, coding and making innovations in computer algorithms.

In its universities, Romania is trying to create some of the most innovative robotics programmes, and via its partnership with Bulgarian universities it is aiming at creating cutting edge technology for prosthetics, vision and hearing aids, among others.

With so much going on in Romania by way of its informatics students, computer science has become a hot topic in one of the coldest Romanian winters, and is bound to propel Romanian education further as the leader in academic areas where computer science will be needed in the future: all of them.