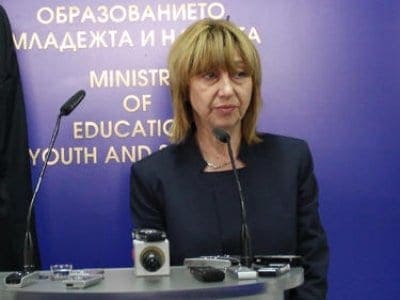 The Bulgarian Minister of Education Prof. Aneliya Klisarova opened The Summer Academy for Teachers, 22 July, 2013, organized jointly by the Syndicate of Bulgarian Teachers and “Europartners”, a Christian Non-profit organization based in 30 countries across Europe aiming to help create strong leaders and environments conducive to leadership and ethical growth.

The summer academy is housed in the Primary School “Hr. Botev” in Burgas Sarafovo. The Minister met with teachers from Smolyan, Sofia, Plovdiv, Pazardzhik, Blagoevgrad, Montana and Sofia. At the opening of the academy, the president of the Syndicate of Bulgarian Teachers, Yanka Takeva, commented that “since the school was established 80 years ago, it is here, in the same place, were we first establish this academy”.

Worthy to highlight is that for the first time in the history of the educational system in Bulgaria, the Minister symbolically held a press conference in a classroom. Higher education and the departing point for the leading professionals of tomorrow surely begins with education in primary school, where youngsters make their first steps towards successful development, instilled with values and the educational basics necessary for advancement and continued education. The Academy will help advance the education of teachers from all levels, from nearly all parts of the country.

Minister Klisarova said that teacher career development, optimization of allocated budgets and vocational education development are the main priorities of secondary education, but everything starts here (inprimary school). The Minister added that Bulgaria should think about making the financing of schools more flexible, pointing out that attention should be paid not only to the number of students, but to the implementation and effectiveness of even better teacher training, with a focus on evaluation. Moreover, the Minister emphasized the need to consider the status of some schools as state, municipal or private institutions, because different regions of the country have different needs. This will help ensure that the path towards higher education is well paved. The Academy will definitely be another stepping stone to help achieve this.

Overall, the Academy will aim at improving functional literacy among students, but will also work to motivate teachers through various training and financial incentives. Minister Klisarova bequeathed primary school books, to become part of the “Holiday 2013 – vacation” reading material. It will help make educators better and help the community.

The opening of the Teacher’s Academy is of particular significance and symbolic of the efforts made by the Bulgarian Government to meet its promises for upgrading Bulgarian education on the whole, in light of the fact that earlier this week in Varna claims were made in an open letter to the Prime Minister by Trade Unions to allocate a bigger budget on education. Government officials noted that 8 of the claims made in the open letter found the government consensus unanimous with the decisions required to meet these demands and in accordance with the Bulgarian strategy for Education by 2020.

“I think we will reach consensus and this will lead to industrial action” said the Minister. She added, “I hope in the new budget we can reach 5% of the GDP spent on education. We will optimize the budget; it is possible for the country”, pointing out that the next steps would pursue optimization of delegated budgets on education and expenditures will be analogous to the number of students. One of the priorities of the Bulgarian educational system at present is to maintain classes with less than 18 pupils, if this is appropriate for the development of a particular region of the country.

Prior to attending the inauguration of the Summer Academy for Teachers, Minister Klisarova was in Varna, attending the celebration of 71 years since the execution of famed national Bulgarian poet and posthumous receiver of the International Peace Award N. Vaptsarov at the Naval Academy that bears his name. She attended the ceremony along with the Minister of Internal Affairs, Tsvetlin Iovchev, Minister of Transport, Information Technology and Communications, Daniel Papazoff and members of parliament from the Ministry of Defense. Official guests were also Varna Mayor Ivan Portnih, the Governor Ivan Velikov, the Municipal Council Ivan Onion, senior military officers, all relatives of the poet and other officials.

Speeches were given about the life, work and personality of Vaptzarov by Acting Captain I Bojan Mednikarov, head of the Naval Academy “N. Vaptzarov” by Minister Jovchev and Minister Angelov. The ceremony was finalized with the laying of wreaths at the monument in the school yard, and Maya Vaptsarova, niece of the poet, read a few verses to the guests. Among those present was the youngest of the family – Nicholas, who is the nephew of the deceased. After the ceremony, Captain I rank Mednikarov personally thanked Minister Klisarova on her initiative, and the celebration of the anniversary of the death of Vaptsarov at the Naval Academy attended by three ministers, who are graduates of the Naval Academy.