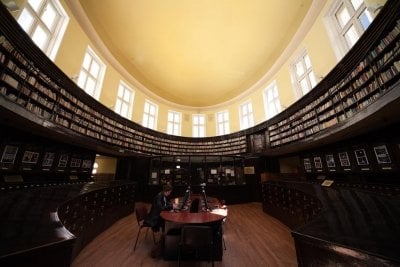 The main library of the Medical University of Sofia, “St. Kliment Ohrdiski”, founded in 1888, is nearing completion of its modernization, late this summer. Before classes begin this fall, the library will be complete with its entire fund digitized and new multimedia resources and archives.

Digitization began under the Grant for Regional Development 2007-2013 and took nearly six years, given the size of the library. Dozens of librarians collaborated for the process, aiming to make infrastructure more cost-effective, suitable and accessible for students and staff alike. More specifically, the project aims at the reconstruction and modernization of 1,000 sq.m depository of the University Library, complete reconstruction and modernization of the depository and the reading room of the Philological branch library, energy efficiency measures and provision of access to the University for disadvantaged people.

In addition, next to the computer rooms, the library has acquired a Braille printer and a Braille display which is at the disposal of all who need it, located in the specially equipped Reading Room for People with Disabilities. A big part of the project has been to include as much material in Braille, but this will take time.

Most regular digitization that requires special equipment has been outsourced to a third party provider of office and printing production solutions, DEVELOP Inc., which delivers monochrome digital reproduction machine prints by scanning at a speed of nearly 100 pages per minute for sensitive prints and about 180 originals per minute whether in black and white or colour for less sensitive materials.

Even at this speed, and a nearly incessant pace since the commencement of the project, nearly all staff and student volunteers had to help out so as to make the library one of the only in Eastern Europe that has almost all its content digitized. Digitization is done in conjunction with the planned comprehensive renovation of the equipment of the Central Medical Library of the Medical University of Sofia, in order to actualize the dream of complete digitization.

Besides the regular activities and events that take place twice monthly, the library, after 125 years of full operation, is entering a new phase, that of the digital era, and it is doing so on a strong footing. At present, it is offering trial access to nearly all its licensed access to electronic material, be it books, periodicals, references and conference proceedings for students and academic staff. As the project nears completion, since March and for most of the summer, the library lobby will include the jubilee exhibition of the “First Librarian of the School of Higher Education”, dedicated to the 150th birth anniversary of Prof. Lyuobomir Miletich – co-founder of Sofia University and the founder of Slavic Linguistics in Bulgaria.

Together with this exhibit, is a permanent exhibit in French, entitled “IItineraires balkaniques” which is a project that aims to create a digital thematic corpus that unites various documents containing information on the Balkan Peninsula and the people who inhabit it – travel accounts and notes, memoirs and maps, various geographical and historical data by French and other foreign authors published in French from the rich holdings of major Balkan libraries – The National library of Romania (Bucharest), the University Library “St. Kliment Ohridski” (Sofia) and the University Library “Svetozar Markovic” (Belgrade). The first phase of the project envisages the digital library to reach a volume of 50,000 digital objects, selected from the three libraries. The editions from the nineteenth century with a total volume of 10,000 pages will be presented in text format. At present it is in phase XVI-XIX and it is certainly well worth a visit as it is nothing short of a museum for Balkan documents.

Certainly, from an academic perspective, this library remains a gem for Eastern Europe and it will continue to expand in years to come. Under such a spirit of erudite scholarship, one can only recall the words by Prof. of Cornell University Benjamin Ide Wheeler that fringe the Library of Sofia University emblem: “Give me a library and I will create a University about it”.