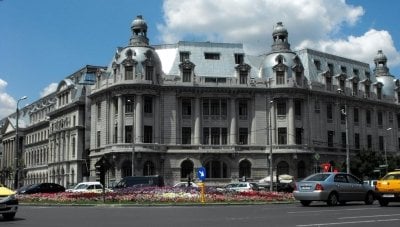 Professor Gigel Paraschiv, also Secretary of State for Romanian Higher Education at the Ministry of Education, Research, Youth and Sports met with Hon. Neomal Perera, the Sri Lankan Deputy Minister of External Affairs, in Colombo, Sri Lanka, from 8th – 9th June 2013. Present was also a Romanian delegation group of six members, headed by Dr. Paraschiv, who also attended the Educational Fair, scheduled to take place for a week spanning the aforementioned dates. The fair took place on a proposal made by the Hon. Tikiri Kobbekaduwa, Governor of the Central Province during the meeting he had with the Romanian delegation who visited Sri Lanka in March this year to open the Honorary Consulate of Romania in Kandy. A large of number of universities and educational institutions are holding promotional events in Sri Lanka to tap the outflow of students who are seeking higher educational opportunities abroad due to the insufficiency of places at universities in Sri Lanka to accommodate the qualified entrants.

About two months earlier, Dr. Paraschiv and his delegation had visited The College of Global Studies (Arcadia), a visit that highlights the growing connections between the College and educators in Romania and included discussions on developments in Romanian higher education. The Romanian delegation included Dr. Sorin Mihai Climeanu (Rector of the University of Agronomy and Veterinary Medicine), and Dr. Carmen Cretu (Vice Rector of Cuza University of Iasi) as well as Dr. Tudor Stanciu (Ministry of Higher education and Fullbright Scholar in Residence). The meeting aimed at strengthening international university cooperation, and included informative presentations on Romania’s higher education system by the Secretary of State, the University of Agronomy and Veterinary Medicine by Rector Cimpeanu, and on the University of Iasi Vice Rector Cretu, and it finalized with talks between Dr. Paraschiv and Dr. Douglas M. Turco, the Associate Academic Dean at the College, who is also a visiting professor at The Romanian American University, on the courses that brought faculty, staff and students to Romania in 2012 and 2013.

These meetings are only some in a series of scheduled conventions to take place throughout the year, with most notable being the visit of Mr. Remus Pricopie, the Romanian Minister for National Education, to London at the University of Oxford in April. In fact, the purpose of these meetings is no other than to further strengthen the international caliber of Romanian Higher education, and seems to be in line with the Government of Romania National Reform Programme for 2011-2013, which includes the augmentation of Romanian educational services on a global scale.

More specifically, within the framework of the Euro Plus Pact report and directives, Romania aims to become a global leader in education within the next two decades. As a result, the Romanian Government passed a Law (no. 1/2011) in December 2011 on National Education. In drafting the law, besides the expertise and national policy documents in education, and in order to prepare the proposed legislative solutions, the law took into account, identified and analyzed other states’ relevant legislation with particular attention paid to recent trends in education in the west. Since then, this legislative endeavour has been followed by bold administrative action and appropriate financial allocations. At a European level, Romania has focused on improving quality and increasing investment in education, as well as vocational education and training. As part of this nationwide programme, Romania continues to aim at increasing participation across all levels of education, with a particular focus on higher education.

Higher education reforms tend to stir controversy. Currently, several countries in Central and Eastern Europe are undertaking or considering major reforms in higher education, in particular in the area of financing and governance. While some actors and observers see these reforms as a threat, others claim they will open new possibilities for both students and universities. Austerity measures are not unprecedented in times of financial crisis, but the way they affect universities in their region and their public mission remains disputable, and in the case of Romania, it is self-evident that the economic crisis has anything but negatively affected the augmentation of its universities.

Ensuring a larger educational and professional mobility of students and teachers represents, according to the European Commission, an envisaged priority so as to achieve the two targets set by the Europe 2020 Strategy in the field of education, namely: reducing early school leaving rate to a maximum of 10% and increasing the share of 30-34 year olds who have completed tertiary or equivalent education in Romania to at least 40%. At present, Romania has met and exceeded these goals and continues its academic ascent. Modernizing the Romanian educational system has entailed adjustments and calibration of services and curricula so as to better suit the current requirements of the knowledge-based society and intelligent, sustainable and inclusive growth with improved organization design.

Romania has managed to synchronize education cycles with the requirements of a modern education system and the European Qualification Framework, by re-organizing the structure of primary and secondary education so as to ensure university entrance is well-paved road without hurdles. It has modernized and decongested the school curricula, so that they focus more on critical thinking, application of knowledge, research and innovation and active citizenship, and has re-organized the student assessment system so that it includes an educational portfolio that includes all diplomas, certificates, and other documents relating to qualifications obtained during formal, non-formal and informal learning frameworks. In addition, Romania has ensured a high degree of decentralization, accountability and financing of the educational system by means of transfer of responsibilities to the School Boards of Regents and Administration and local authorities. Particularly with regard to financing, the new, aforementioned Law stipulates that at least 6% of the nation’s GDP will be allocated for education annually.

It is no wonder, thus, why Romanian tuition is one of the lowest globally, if not the lowest, and of course why Romania is fast becoming a hub for international students.