HomeOur ArticlesBulgaria and Russia to cooperate in culture, education, science

Bulgaria and Russia to cooperate in culture, education, science 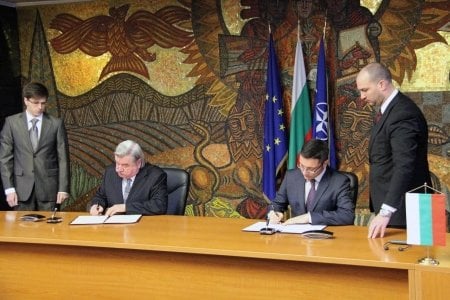 The programme will offer solutions to mutual problems faced by both countries in areas of culture, education and science, as well as create opportunities that are of mutual benefit and profit in the previously mentioned areas, thus enabling the possibility for extensive cooperation between cultural, educational and scientific institutions and organizations in the two countries and strengthening bilateral relations.

On December 10, the Minister of Foreign Affairs Kristian Vigenin and the Ambassador Extraordinary and Plenipotentiary of the Russian Federation to Sofia, Yuri Isakov, signed the draft for the “Program of cultural, educational and scientific cooperation” between the two governments, at the Ministry of Foreign Affairs of the Republic of Bulgaria.

After the ceremony, Kristin Vigenin said that “this document will allow intensification of our cooperation in the fields of education, culture and science, and will create more favorable conditions for the training of our students in Russia and Bulgaria, be it through exchange programs for graduates and the provision of academic staff, among benefits.”

Kristian Vigenin also emphasized that this year this programme of cultural cooperation will be conducted within the framework of the 135th anniversary celebrations of the liberation of Bulgaria. “In 2014, we celebrate 135 years of the establishment of the diplomatic relations between Russia and Bulgaria and I hope that on this occasion we will implement an ambitious cultural, scientific and educational program”, he added.

On the other hand, Ambassador Yuri Isakov expressed satisfaction with the excellent partnership and cooperation relations between Bulgaria and Russia in the fields of culture and science, and pointed out the need to channel more resources into education. He also mentioned the significant cultural events organized in 2013 in Moscow to commemorate the “Days of Sofia”. The Ambassador also highlighted that in 2014 there will also be many other such commemorative events, most importantly the 135th anniversary from the adoption of the Tarnovo Constitution, and the 90th anniversary of the consecration of the Cathedral of “St. Alexander Nevsky”.

Under the light of such programmes, Bulgaria aims to continue its international ascent to the international top list of countries that provide the best higher academic services in the world.