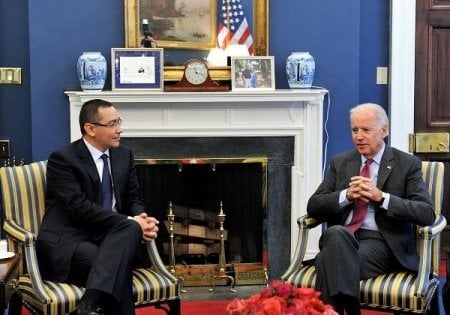 Romanian Prime Minister Victor Ponta started an official three-day visit to the USA, where he will meet with the World Bank President Jim Yong Kim, U.S. Vice President Joe Biden at the White House, as well as congressmen and executives of U.S. companies ExxonMobil, Chevron, Motorola, IBM and Hewlett-Packard to discuss the political, military and educational strategies for the country.

“Tuesday I will have a meeting with the World Bank president, with which Romania is conducting extremely important programs, and also on Tuesday will be the official visit at the White House with Vice-President Joe Biden,” said Victor Ponta.

During his visit to the US, the Romanian PM will be accompanied by Ministers of energy, foreign affairs, environment and the ministers of education. The visit will have a political and economic character and will include discussions related to the projects Romania has with the US, as well as the furtherance of educational opportunities that Americans and Romanians have in the two countries.

“Our objectives are to reaffirm the political and military strategic partnership and the prospects for cooperation in the period ahead, but also economic partnership, since the visit also has an important economic side, namely meetings with the representatives of major companies that have already heavily invested in Romania or possibly have investment plans; I am speaking of three important fields: energy, IT and the modern equipment and engineering industry. We will also have meetings at the Congress with those representatives directly tasked with modifying the legislation that will, in the future, allow Romania to be included in the Visa Waiver programme”, said the prime minister at Victoria Palace (the Govt’s offices) on Friday.

The Second important part of the visit, Ponta added, is represented by the cultural and educational exchanges; and he pointed out that the Government, in this respect, had approved a memorandum on continuing Fulbright scholarship programmes on Friday, thus furthering US relations with regard to education.

“I think it is very important and strategic for Romania to keep, to consolidate and to offer a future prospect to our special relation, to our strategic partnership with the United States of America. I hope that the Romanian state representatives will, from now on, have as close as possible relations, over as short as possible periods of time, with the official representatives of the U.S. state”, he said.

Ponta highlighted that it is for the first time in 10 years that a Romanian prime minister goes on such a visit. On Wednesday, Ponta will attend a ceremony for signing the cooperation agreement with the Holocaust Museum and will discuss the Visa Waiver programme with American congressmen.

He also noted that there will be no businessmen in the Romanian official delegation accompanying him to Washington. “The visit is organized by the Romanian Foreign Affairs Ministry and the U.S. Department of State”, he added. When asked whether he is considering the possibility of meeting U.S. President Barack Obama too, the premier explained that the meeting level is president-to-president and since the United States does not have a prime minister, he will meet Vice President Joe Biden.