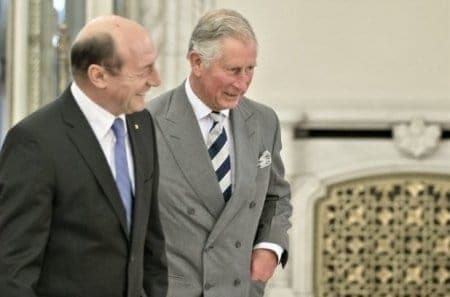 This past Saturday, Prince Charles was made an honorary doctor at the University of Bucharest. In his speech, he appealed to Romanian students to preserve their national heritage, customs, mores, and the country’s exceptional flora and fauna.

Prince Charles, a British prince coming to the rescue of the crisis-hit country as though out of a fairy-tale, pointed out to the students how enamored he is with Romania’s rare natural beauty. He has been a frequent visitor to Romania for well over a decade, but made official public appearances only since in 1997.

In a previous speech in a known UK magazine, the Prince of Wales had joined a campaign to salvage “the fairytale woods” of Transylvannia in Romania, reminding everybody yet again of his Vlad the Impaler-related genealogy. The famed mysterious forests of the Carpathians, which once inspired vampire legends, are “some of the last wild areas in Europe still pristine”, he had pointed out.

Echoing these words, in the opening of his speech at the University of Bucharest, he remarked: “I love Romania for her eternity. A remarkable thing. It is almost as in my childhood fairytales. People here can only wish to cherish the same attachment to the land. We have to rediscover these feelings, to come back to them, and I want to make sure this way of life will continue”.

Besides making an important investment in the less-known and untouched-by-tourism regions of two beautiful Romanian villages near Sighisoara, Viscri and Malancrav, which may well be considered the unofficial “crown jewels” for the prince of Wales, who stops there whenever he goes to Romania, he has also recently bought manor and several properties in the legendary Transylvanian vicinity. One of his estates associated with the Malancrav Foundation’s “Mihai Eminescu Trust” took in concession 108 acres of orchard and since 2003 produces natural, organic apple juice, offering jobs to locals.

This large farm estate in Transylvania is also the departing point from where he enjoys exploring the mystical forests teeming with wild bears, wolves and wild game, as well as the pastures, meadows and majestic mountains, peppered with quaint villages on their foot and ancient Orthodox monasteries.

“My genealogy shows I am the descendant of Vlad [the Impaler] so I am connected to Romania”, the prince said to the students. “Transylvania is a national treasure due to its unaltered landscape and centuries old farming traditions”, he added. The Prince of Wales also is related to King Michael I of Romania, first cousin thrice removed to Queen Elisabeth II, which goes to show why the Prince of Wales is so deeply dedicated to Romania’s natural and historic heritage and expresses a gracious reverence to its spirituality, often visiting churches in Bucovina and Oltenia. Vlad the Impaler is more well known as “Dracula” in popular culture.

Prince Charles is also doing the greatest favor to Romania on Travel Channel’s “Wild Charpatia” (the Wild Carpathians) series of four episodes, in which he revealed once more that Voivode Romanian king Vlad the Impaler was his ancestor, and once more spoke of Transylvania as “a unique treasure of Europe”.

Further in his speech at Bucharest University, he underlined that “In Transylvania there is a unique, extraordinary relationship between the natural ecosystem and the human cultural system. […] This symbiosis, is extremely important because people need this sense of belonging, identity and community now more than ever”.

About halfway in his talk at the University of Bucharest, Charles also criticized state policy for destroying Romanian villages to make more room for agriculture, alluding to personal interest in the matter as his ancestor, Claudina Rhedey, is buried in Sangeorgiu de Padure. The prince called on Romania to preserve its rural traditions, saying it could help boost the economy in the poor European nation. “If traditions are preserved, they will bring huge financial benefits to your nation. […] Romania’s countryside is threatened by development and migration” he told the graduating students at the University of Bucharest.

About half of Romania’s 19 million live in rural areas. Through the “Mihai Eminescu” foundation, a conservation and regeneration organization, Prince Charles helps finance the reconditioning of several Transylvanian edifices, providing some of the funds for the renovation of the Banffy palace in Bontida. This Romanian foundation is. He has also been a supporter of the FARA Foundation, a charity for Romanian orphans and abandoned children. Since his public appearances in Romania in 1997, the Prince of Wales has highlighted the destruction of Orthodox monasteries and Transylvanian Saxon villages.

On this note, it is worth noting that the Prince of Wales has visited several times, albeit with a low profile, Orthodox monasteries on Mount Athos in Greece (the equivalent of the Vatican for Orthodox Christianity) some of which have connections to Romanian Monasteries. Recently, he has been particularly interested in Romanian Orthodox monasteries, whose art he commented on during his University speech as “exquisite national heritage”.

In the final notes of his speech to the graduates of Bucharest university, Prince Charles remarked on the pressing need to salvage the nation’s medieval villages and preserve the “the timeless quality of life”. One cannot help but invoke the words of Historian Tom Gallagher, who wrote in the Romanian newspaper RomÃ¢nia LiberÄƒ in 2006 that Charles had been offered the Romanian throne by monarchists in that country; an offer that was reportedly turned down. Nonetheless, Buckingham Palace has time and again categorically denied the reports.

Charles’s professed love for Romania and his lyrical reflections on Transylvania has caused Bucharest columnist Bogdan Chiriac to ask: “Has anyone ever heard Prince Charles referring with such beautiful words to England?”

A medical student from the UK who just graduated from the University of Bucharest and attended the speech said: “At any rate, with such prospects of affinity and lineage converging between the UK and Romania, certainly being an English graduate from a Romanian medical university is a sign of equally good prospects”.