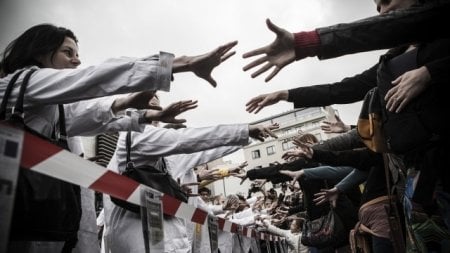 Greek scientists have been abandoning their country in the thousands in the last few years, but this is a phenomenon that not only affects graduates of theoretical and practical schools, but medical graduates especially. According to the Athens Medical Association (ISA), Greek doctors emigrating for better working conditions amount to thousands, about 7,500 in the last six years.

Specifically, based on certificates issued by ISA, the total number of Greek medics who found employment in other countries, regardless of specialization, i.e. whether they are doctors or nurses or practice various healthcare specializations, exceed 10,000 since the financial crisis hit.

Until 2009, the drain of doctors in Greece concerned mainly medical graduates who had completed their practical training, subsequently seeking foreign hospitals to specialize. On average, shortly after the economic crisis, about 500 doctors were emigrating annually, of which nearly 200 were specialists and 300 without a specialization, while the number nurses and other medical personnel was about the same.

Since 2010, the situation has changed dramatically, with Greek hospitals losing hundreds of staff, namely over 2,000 medical staff going abroad only that year. The largest wave was observed from 2011 onwards, seeing that to date approximately another 5,500 general physicians emigrated in search of work since 2011. From this time, the number of doctors who leave Greece concerns not so much young doctors, but mainly specialists. This is mainly due to surgical cuts in wages, the inability of doctors to make an incision in a saturated yet shrinking labor market, unwelcome changes in the health system and meager opportunities in a stagnant private health sector.

From 2010 onwards, specialists and unskilled doctors departing Greece to work in a hospital abroad, mainly in Europe and the UK, increased the rate of immigrant Greek scientists by 2,000-2,500 per annum. In 2013 nearly 1,500 Greek doctors emigrated to Britain alone, while the number of Greek medical personnel pouring into other countries amounts to the hundreds and tens, such as the USA, Canada, Australia, France, Sweden, Norway, Romania, Bulgaria, Denmark, United Arab Emirates, Saudi Arabia and even China.

Many of these doctors who do not have their specialization will pursue a specialization track in these countries, while senior doctors will likely never return. Meanwhile, the number of students in medical schools of Greece is being reduced, as there are fewer who decide to study abroad, given that medical schools in other countries ensure medical students and related medical professionals have immediate access to the labor market with much higher earnings.

A case in point is that the number of prospective medical students opt for neighboring Bulgaria and Romania to pursue medical studies given that a certificate is much cheaper and just as recognized globally.