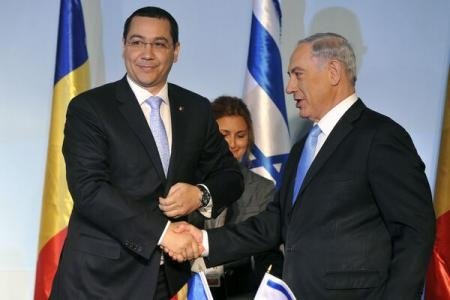 Romanian Prime Minister Victor Ponta appeared very pleased about Romanian-Israeli relations that he characterized as “excellent long-term affairs”, after signing a number of agreements with Israel, near the end of June.

The Cooperation Protocol between the two foreign affairs ministries is part of the EU Neighborhood Policy and recognizes each other’s importance and acknowledges the mutual benefits for both Israel and the European Union so as to promote peace, democracy and regional cooperation, through the encouragement of scientific research, academic exchanges, environmental protection and the strengthening of cultural ties between the two countries.

“We signed 14 cooperation agreements” the Romanian Prime Minister pointed out, adding “very important also are the agreements we signed in research, with the involvement of the Israeli researchers in the ELI project currently being developed in Romania”.

The Agreements concern nearly all ministries of the two countries across a wide spectrum of projects of mutual benefit, most of which concern education and technological development.

Immediately after returning from an official visit to Israel at the Henri Coanda International Airport, the Romanian Prime Minister stated: “We concluded agreements focusing on environment, economic cooperation, education, research, culture – all of them as the result of the excellent long-term cooperation between the two states.”

From his part, Israeli Prime Minister Benjamin Netanyahu, who seemed very pleased to sign the Joint Declaration that binds the two governments in projects of common interest, extending cooperation in various fields of activity, likewise stated “this agreement is based on solid partnership that was built over the years and also on the affinity existing between the Romanian and the Israeli people, supported and promoted by a large community of Israeli citizens originating from Romania and a strong Romanian community existing in Israel.”

Most of the agreements focus on the two countries cooperation concerning environmental protection and conservation, educational research and technological development and a Memorandum on scientific cooperation for the implementation of Extreme Light Infrastructure – Nuclear Physics (ELI-NP) projects developed jointly by the Romanian ‘Horia Hulubei’ National Institute of Physics and Nuclear Engineering and the Racah Institute of Physics, Hebraic University of Jerusalem.

Here it is important to note that the Extreme Light Infrastructure (ELI) project is a new Research Infrastructure (RI) of pan-European interest and part of the European ESFRI Roadmap. It is a laser facility that aims to host some the most intense lasers world-wide, develop new interdisciplinary research opportunities with light from these lasers and secondary radiation derived from them, and make them available to an international scientific user community. It will be the world’s first international user facility in laser research. The facility will be based on four sites, three of which are presently being implemented in the Czech Republic, Hungary and Romania, with an investment volume exceeding €850 million. In MÄƒgurele, Romania, the ELI Nuclear Physics (ELI-NP) facility will focus on laser-based nuclear physics, with applications ranging from medicine to space exploration.

In addition, a Joint Declaration of Intent on cooperation in education technology (TechEd) was signed, as well as a Declaration on cooperation in information and communications technology, and Romania’s Ministry of Labour and Israel’s Ministry of Interior Affairs signed a protocol on the recruitment of Romanian workers for employment in construction and public works in Israel. A similar document was signed concerning the promotion of sports.

The health ministries of Romania and Israel approved an Administrative Arrangement between the two nations and signed a Joint Declaration of Cooperation which will actively involve Romanian and Israeli medical universities, while the Ministry of Development from Romania and the Ministry of Constructions and Housing from Israel signed a Joint Declaration in the housing and urban development field.

Lastly, the two countries concluded another agreement, a Memorandum of Understanding between Romania’s Ministry of Education and Yad Vashem, Israel’s Holocaust memorial and museum.