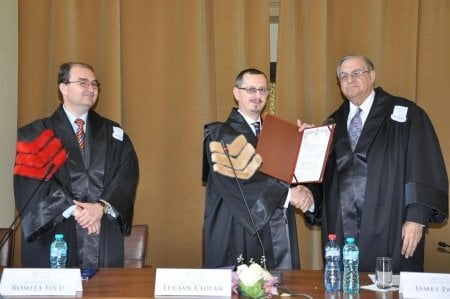 The nearly two-centuries old institution “Universitatea din Bucuresti” (University of Bucharest) in Romania has recently granted James Pappas, Dean of Liberal Studies at Oklahoma University, the title of professor Honoris Causa. The Faculty of Psychology and Educational Studies selected James Pappas for the title out of a number of nominees due to his efforts in education, which have granted him international acclaim.

Earlier in April, a ceremonial vote was held at the University of Bucharest, attended by officials from the University, the Psychology Department and Educational Studies staff, and James Pappas was officially recognized as an honorary professor, and the awarding ceremony was the only part missing.

“Typically, the honorary title is given out by European colleges fewer than 10 times a decade”, James Pappas said, but given James Pappas’ work, one may easily surmise that it is well merited. For nearly 30 years and about 25 years at Oklahoma University Outreach, where he is vice president, he has tirelessly committed himself to improving and advancing continuing education for all students, and has ensured that the importance of lifelong learning gains the attention it requires in academic environments world-wide.

“I’m excited about the fact that, while this is a personal award, it also recognizes the fact that the University of Oklahoma is being regarded internationally as a good school,â€ James Pappas added. The award is in recognition of Pappas’ outstanding achievements in lifelong and continuous education, but is also a sturdy step in building a strong relationship between the two universities.

The University of Oklahoma currently has little involvement with any Romanian institution, but James Pappas said “the University of Bucharest is interested in expanding its own adult education programs” and hopes to form a partnership that will benefit both schools.

“In the College of Liberal Studies, we focus on adult education, and that’s something the University of Bucharest is very interested in”, Pappas said. “Oklahoma University is a good model for how those types of programs can work. If we can develop activities between the two universities, it would enhance our ability to teach, as well as theirs, and create a great environment for exchanges.”