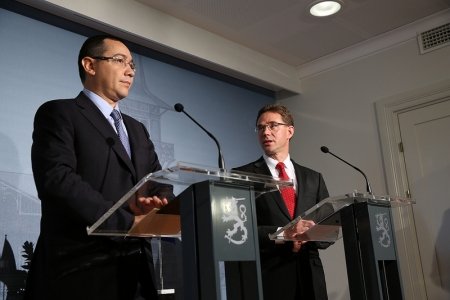 Last month, the Prime Minister of Romania, Victor Ponta, met with Prime Minister Jyrki Katainen in Helsinki. The premiers discussed key EU issues including the economic situation, strengthening of the Economic and Monetary Union as well as economic growth and employment in Europe. With regard to the relations between Finland and Romania, the discussion focused extensively on cooperation opportunities in the field of education.

While in Finland, Prime Minister Ponta also had a meeting with Speaker of Parliament Eero HeinÃ¤luoma and Minister of Finance Jutta Urpilainen and visited the Aalto University together with Minister of Education and Science Krista Kiuru.

“The level of trade exchanges is still very low. We have many opportunities and areas in which we can develop cooperation”, Ponta told a joint press conference he gave together with his Finnish counterpart Jyrki Katainen.

Victor Ponta also voiced wish that Romania should benefit by “the excellent development of the Finnish educational system”. He added, “This is why I am being accompanied on this visit by the Minister of Research and Higher Education [Mihnea Costoiu], who will have a very important event this afternoon, on the basis of the good experience and of the model that can be used in improving the Romanian educational system”.

On the other hand, Jykri Katainen voiced satisfaction with the fact that Romania and companies from Finland said they were interested in having a closer cooperation in education. “There are some Finnish companies that are prepared to evaluate the educational system of Romania and find solutions together with the Romanian authorities”, said the Finnish Premier.

Katainen also made it clear that he had discussed with Victor Ponta the necessity of a closer cooperation “especially in green technologies”, including, among other things, renewable energy, energy efficiency and especially “green mining”.

“We should find the best possible technologies that best respect the environment in order to make mining more sustainable in ecological and economic terms. We have a similar situation in both these countries, a situation in which I think we can do many things together in the years to come”, said Katainen.

As for the future of the EU, the Finnish Premier said that “we need more Europe, but also national answers” to certain questions. Romanian Prime Minister Victor Ponta asked for technical assistance from the Finnish government and from the private sector in this country, regarding the use of green technologies in mining, since “the Finnish standards are currently the most advanced in Europe. I was informed about the advanced green technology used by Finland in its mining sector. In Finland there are exploitations of gold, uranium and many other mineral resources”, stated Victor Ponta,during a joint press conference with his Finnish counterpart, Jyrki Katainen.

Victor Ponta on Monday in Helsinki also said that the decision about Romania’s accession to the Schengen Area will be politically motivated and that he is happy with the answer he received from Finland’s prime minister about this issue. This will have a direct effect on business, education and strategic cooperation within the EU.