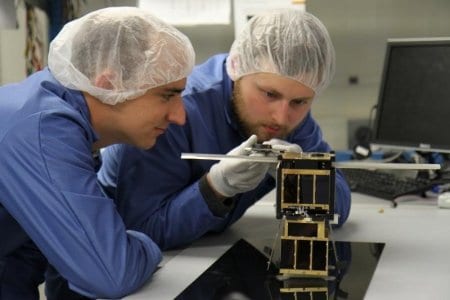 Not long after Minister Delegate for Higher Education, Scientific Research and Technological Development Mihnea Costoiu visited the United States of America to discuss the prospect of launching satellites, Romanian authorities proudly announced this past Sunday in a press conference, presence of Minister Delegate Mihnea Costoiu that two new satellites will be launched as part of a group of no less than 50 international nano-satellites.

As it is right now, among the 50 nano-satellites to be launched, Romania will send two satellites, as will the USA, Japan, Germany and Italy. Mihnea Costoiu also pointed out that NASA’s support for Romania with experts and technology is very important for taking Romania a leap forward in space research.

Mihnea Costoiu had also visited the International Space Exploration Forum besides NASA to discuss the details for the purpose of these satellites, which will be no other than to offer insight into the highest strata of the earth’s atmosphere. Such satellites are being built as part of a wider project co-funded with the European Space Agency to study the Earth’s highest atmosphere.

Endorsement from NASA in general, and especially NASA General Charles Bolden, who will visit Romanian Universities and companies in Spring for presenting this space research opportunity in Romania will set Romania as a permanent strong player in Space. According to the Minister Delegate, “in the International Space Exploration Forum, Romania is one of the most important scientific forces of Eastern Europe”.

At present, Romania is the second EU member state that is a member of the European Space Agency, so future plans will definitely include participation in new Moon exploration missions, missions to Mars and Jupiter and perhaps Venus.

As part of its duties for such projects, Romania must create the radiation conditions that simulate the environment around Jupiter, and will be conducting research on the effects of such radiation on communications satellites, said the Minister Delegate.

Mihnea Costoiu added that the National Council of Rectors chairman, Sorin Cimpeanu, agreed that the projects shall commence July 1, 2014, after the bilateral exchange between Romanian and USA universities in all related faculties has developed clear guidelines.