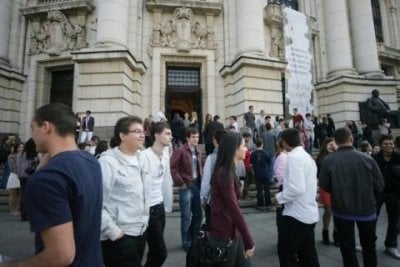 According to the 2012-13 National Report of Bulgaria for Education and Training 2020 Bulgaria not only remains on par with its commitments to the budget for education, but also meets and exceeds expectations despite the economic crisis that has plagued the euro zone in the past few years. The report is a contribution to the joint progress report of the European council and commission on the implementation of the strategic framework for European cooperation in education and training for 2020 and includes a section that is dedicated to the extent in which the economic and financial crisis affected the budgets for education and training as well as the development of particular education sectors.

The main reason why the Bulgarian educational system has managed to remain buoyant and afloat the economic crisis which forced other European nations to implement severe cutbacks in education is that since 2009 Bulgaria had the foresight to implement a Law on the National Budget for Education. This Law acted as a levee against the surge of problems wrought by the crisis. More specifically, the Law on the National Budget of Bulgaria for 2009 stipulated that the noninterest expenses and transfers be set at 90% and the budget be performed at 90 % of the eligible costs, both with regard to delegated activities for education, preparation and training of children and students at state-owned and municipal kindergartens, as well as with regard to state-owned universities.

This meant that Bulgarian education remained efficient at the wake of the economic crisis. Since then, for 2010, fearing for the worst, Bulgaria further safeguarded the educational system by amending and supplementing the Law so as to minimize costs and make more efficient use of financial resources, by reforming the budgets of the Ministry of Education, Youth and Science. In turn, the budgets of state-owned universities were reduced by 20%, with regard to domains that would not hinder operations and quality of services. This adjustment of the expenses for 2010 paved the way for optimization and restructuring of the expense commitments for the year, and for the coming years, and helped in the implementation of structural changes, with the added benefit that it greatly reduced bureaucracy.

Bulgaria essentially made cuts from the Ministry budget and less from the educational system. By extension, the cuts in expenses of the budget of the Ministry of Education, Youth and Science for 2010 did not affect the expenses for the education activities delegated by the government (the budgets of schools and units applying the delegated budgets system). In fact, the amount of the unified expense standards for upper secondary education stayed within 2009 levels. Subsequently, in 2011 the budget for education stayed at the adjusted level of the expenses for 2010. The funding of the delegated education activities for schools stayed at the 2009 levels and the subsidy of state-owned universities for 2011 remained at the level of the revised budget for 2010. Moreover, the Law on the National Budget of Bulgaria for 2011 approved admissible maximum amounts of liabilities to suppliers and to employees of organizations disposing with budget credits who are delegated on long-term assignments, as regards education.

On the whole, the economic and financial crisis led to limiting the expenses for investments, be it in the upper secondary and in the higher education whereby from 2009 to 2011 the funds for national programmes for development of the upper secondary education decreased from BGN 263.4 million to BGN 30 million, but this did not affect the quality of services especially in higher education, as the 2009 Law ensured that these remained at least stable, within pre-crisis standards. Better yet, the salaries of teachers and trainers stayed at the same level and actions were taken for optimizing the maintenance expenses in the education system. There was also a strong reduction of the expenses for conducting policies and reforms in upper secondary education.

Nonetheless, this temporary lack of investments has not stopped Bulgaria from developing and successfully implementing a variety of programmes to support students, with a most notable example being a scholarship programme for medical students and residents who are disadvantaged (supported by the Open Society Institute and by MEYS). Its objective was to promote the inclusion of a disadvantaged group in higher medical education thus creating prerequisites for improving the provision of health services in all communities and for facilitating the overcoming of discrimination in the health care system according to EU standards.

The practical upshot of safeguarding the educational system and quality of higher education during the economic crisis, and in light of the low tuition and reasonable cost of life in Bulgaria, is that numerous foreign students have poured into Bulgaria for Master’s and Bachelor’s studies, seeing that the educational system of their home country has taken a hit, and while young adults and their families struggle to afford a good education in their homeland or elsewhere abroad, thus making Bulgaria an international students’ first choice.

It seems that as the crisis is beginning to wane, the Bulgarian educational system is on a good head start while other EU member states recover.